What's on the menu at the benchmark bistro?

Here is a flavour of what is emerging in terms of benchmark alternatives as the end of LIBOR comes closer. Local flavours may be the dish of the day, but all players are going to have to work together this year so as to be able to get the meal they want 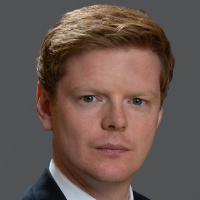 A 'bistro' (at least in its original Parisian incarnation) is a small restaurant serving cost efficient, simple meals using local recipes. Some claim that the word originated among Russian troops occupying Paris following the Napoleonic Wars (from the word ‘быстро', meaning ‘quickly’).

As LIBOR cessation edges closer, the export finance market is working hard to create a menu of interest rate benchmark alternatives for borrowers to choose from prior to LIBOR's cessation. The goal is to manage the process ‘simply’, ‘quickly’ and in a ‘cost efficient’ manner using different ‘local recipes’ for different currencies, governing laws and deal types. To achieve this, it is critical that the industry works together throughout the remainder of 2021.

A summary of all recent developments is beyond the scope of this article, but the export finance community may be particularly interested in:

Format of the menu

From a documentation perspective, English and New York law governed syndicated loan agreements are following slightly different approaches. In New York law governed credit agreements, the hardwired 'waterfall' approach has been recommended for use, where the administrative agent is granted discretion to make 'conforming changes' which are required in relation to the switch from LIBOR to an alternative reference rate.

This is in contrast to the English law approach, which is to pre-agree all or almost all of the RFR terms at the outset, such that few conforming changes need to be made at the trigger date for the switch. It means that documenting an English law facility agreement which refers to an RFR rather than, or in addition to, LIBOR (including, if based on the Loan Market Association's 'rate switch' exposure draft) is a surprisingly time consuming process which involves the parties answering various commercial and operational questions, especially where there are multiple parties with different views.

It is fair to say that the export finance market has not been an early mover when it comes to IBOR transition. It was never going to be due to the range of currencies, parties, governing laws and types of deals involved. In addition, the economic fallout from the pandemic has meant that the export finance community has been focused on other matters such as processing amendments and waivers and claims and (in several countries) being mobilised to support domestic businesses, in addition to their 'usual' business.

So what is the current state of play? We have spoken to dozens of banks, borrowers and ECAs in the past few months. Most institutions now have a good idea of the number of loans in their legacy book that will need to be amended and the key features of such loans (for example, currency, governing law, bilateral or syndicated, single or multi-ECA and borrower type). This is an important and necessary first step in order to transition away from LIBOR in an orderly manner.

When it comes to how these legacy loans will be dealt with, and how new ECA covered loans should be priced, the picture is less clear. Interest rate benchmarks are ultimately matters of pricing, but ECAs do need to participate in the discussion, including for internal operations and underwriting purposes. Most ECA cover documents also require ECA consent to be obtained for any amendment to the manner in which interest is calculated, lest banks run the risk of vitiating the cover. Many in the industry are concerned about the administrative burden that processing LIBOR transition related amendments is going to have on the credit, legal and operations teams of banks and ECAs, at a time when the demand for new ECA covered loans is likely to be high given the macroeconomic reality.

What can we do to get a table at the benchmark bistro?

As well as deal-specific discussions between borrowers, banks and ECAs, various export finance working groups have been discussing the topic, including the newly formed IBOR Transition Sub-Committee of the ICC Export Finance Working Group (which Mayer Brown is a member of). The aim of such discussions is to collectively engage with ECAs and regulators in relation to legacy deals and new deals.

Ideally the market can ultimately agree on a menu of possible options for use in different circumstances, such that it becomes relatively straightforward for banks, borrowers and ECAs to consider and manage the transition from a systems and operations perspective. The menu will likely need to include forward looking term rates (where available), but also the more customary backward looking RFRs for those borrowers who are comfortable with being informed of the exact amount of interest around five business days before an interest payment date and who want to align their ECA covered debt with non-ECA covered debt and/or interest rate hedging governed by ISDA documentation.

Discussing, negotiating and documenting LIBOR transition is going to be a challenge. It is arguably more difficult for the export finance market than many others, given the wide range of borrower-types and the necessary involvement of agencies and fixed rate providers. If the market adopts a splintered approach with each bank, borrower and ECA taking slightly different views, the process will be even more challenging. The earlier that everyone in the industry grasps the nettle of LIBOR transition, the more likely it is that we will achieve the aim of transitioning away from LIBOR in a simple, cost-efficient and quick manner. Before long, we will all be regulars at the benchmark bistro even if our preferred 'menu' choices might differ slightly. 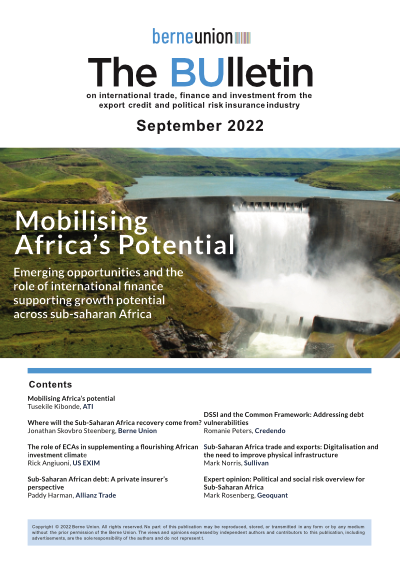 Curated by the BU Sub-Saharan Africa Working Group, authors for this special edition of the BUlletin explore areas of growth and the role of different sources of international finance tapping this